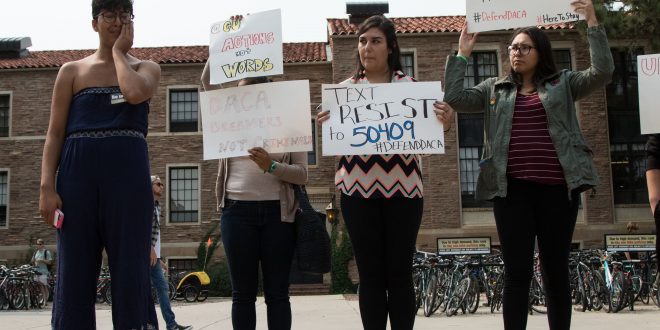 A CU student, who is not undocumented herself, tears up while speaking about the friends she has made in the undocumented community during a rally against the president’s decision to end the program, taken on Sept. 5, 2017. (Jackson Barnett/CU Independent)

After days of speculation regarding DACA, the president officially ended the program Tuesday morning. Attorney General Jeff Sessions announced the decision at the Department of Justice.

An executive order implemented in 2012 by the Obama administration, DACA applies specifically to those who immigrated to the U.S. before June 15, 2007 and were under the age of 31 as of June 15, 2012. Of the over 800,000 estimated individuals eligible for a DACA-issued permit, about 33,000 live in Colorado, including over 70 students on the University of Colorado, Boulder, campus. The program functions on renewable two-year work or study visas and does not grant a path to citizenship, just a temporary reprieve from the threat of deportation.

The Trump administration announced that Congress has until March to set up a replacement for DACA via legislation before the program will be phased out. The federal government will no longer accept new applications for potential DACA recipients, but those currently in the program will be covered until their current permit runs out, and those who’s expire before March 5 will be allowed one last renewal. The first permits will start expiring this March.

Students at Boulder High School walked out of their classes to protest the repeal, leaving school and marching through the CU campus holding signs. The group of about 35 students went up Broadway Street to the University Memorial Center, then traveled back down 28th Street to the front of the high school. They remained there holding their signs for cars passing along on Arapahoe Avenue and chanting slogans such as “D-A-C-A! DACA is here to stay.”

The walkout came only hours after the official announcement, due to the event being planned over the weekend. As early as Friday, there were reports that Trump would put an end to DACA on Tuesday, as the attorneys general of 10 states said they would file a lawsuit over the program if Trump did not rescind it by that date.

“We were just trying to get the word out,” said Ellory, a Boulder High student who helped plan the walk out. “Let people know that it’s not OK [and] that people care about these kinds of issues.”

The organizers said that they were influenced by another walkout in the area. The Auraria campus in Denver held a rally in support of DACA, hosted by the Colorado Immigrant Rights Coalition. Hundreds of students attended, the Denver Post reported.

Later in the day, a couple hundred CU students, faculty and community members gathered in the center of campus to demonstrate in solidarity with undocumented students.

The Latino student group UMAS y MEXA, campus group BuffsUnited and the CIRC announced the protest online. Held at the UMC fountains, a group of students stood in front of a large crowd with signs protesting the action. The protest’s message centered around calling on the CU administration to take action.

“They need to take concrete steps so that there is actual insulation between the federal government and the students here,” said Richard Barahona, a senior at CU Boulder and the former head of activism for UMAS y MEXA.

The crowd included first-generation Americans as well as undocumented students. Throughout the protest, students and faculty came up to the front of the crowd to share their experiences being undocumented or knowing those who are.

Gaby Solana, a DACA recipient, stood in front of the crowd for the duration of the protest. Frustrated and overcome with emotion, she expressed intense frustration recounting experiences of discrimination at CU Boulder, a predominantly white university, and the U.S. in general.

“It’s really hard to wake up in the morning and realize that your future’s about to be over,” Solana said. “Coming from an undocumented family, it’s hard because I’ve seen the struggle my parents have faced, but also the struggles I have overcome. And to have it all end one day by a decision like this — I know it’s not over. The only power we have as a community right now is our voice.”

Louise Vazquez, a first-generation American, grew up in the San Luis Valley area, which has a significantly large Hispanic immigrant community. While she has protections as a citizen of the U.S., she bore witness to the impact that being undocumented had on the quality of life of those around her.

“Many of my friends weren’t able to come to college because of their immigration status and this is just another way that hate spreads,” Vazquez said. “It’s very tragic to see this in our country. As an immigrant myself I think this is so horrible and I hope that all of us can stand together to fight this kind of hated, this bigotry against people who do not deserve it.”

As of Tuesday afternoon, CU President Bruce Benson’s office issued a statement about DACA speaking for the four CU campuses. It said that CU plans on working with Congress, saying, “[w]e will continue to stand with our students and work to ensure they can pursue the education that will benefit them and our country, and engage them in a process to allow them to remain here.” This followed a statement released on Saturday with a similar message and was coupled by a statement from CU Boulder Chancellor Philip DiStefano released this afternoon in support of DACA students on the Boulder campus specifically.

Despite these releases, many students expressed frustration that campus administration isn’t doing more. DACA students are often given in-state tuition, and the CU Foundation set up a private fund in the spring specifically for DACA students. However, as Edwin Mendoza, head of activism for UMAS y MEXA and founder of the Latinx Student Alliance, pointed out to the crowd, DACA recipients cannot apply for nearly as many scholarships as in-state or out-of-state students, because they’re on temporary permits and aren’t legally considered residents or citizens.

“We are more than money [for the school], we are people here, we are your fellow classmates,” Mendoza said.

In addition to the rally, students also marched from campus to a city council meeting where a resolution concerning the future of DACA would be discussed, chanting phrases such as “power to the people, no one is illegal,” “white silence is white violence” and “don’t give into racist fear, immigrants are welcome here.”

“It feels like a slap in the face,” said Bruno Tapia Garcia, an undocumented student at CU, on his response towards the president’s decision to dismantle the program. “We’re law abiding people, we’re just trying to go to school and get a job, we’re just trying to live normal lives in the country we’ve lived most of our lives in.”

Similar sentiments were echoed by Boulder residents who shared their testimonies during the open-comment portion of the city council meeting on Tuesday night. Individuals requested that the city prevent current DACA students from losing their status and that efforts be made to communicate with law enforcement to avoid colluding with Immigration and Customs Enforcement.

Resolution 1215 supporting the extension of DACA was passed with a unanimous council vote at the end of the meeting. Sitting representatives concluded the session by assuring those in attendance that they do not condone the president’s decision to end the program and of their commitment to call on Congress for greater protection efforts.

“We’re not going to allow this to happen to you or to us, because what happens to you happens to us,” city councilwoman Lisa Morzel said.