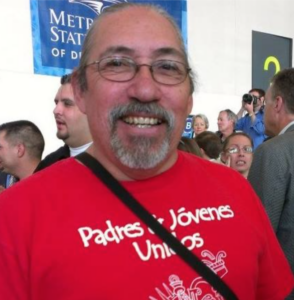 The Colorado Immigrant Rights Coalition pays tribute to Ricardo Martinez and sends our deepest condolences to his wife, Pam, and family on his passing on January 20, 2022.

Over 30 years ago, Ricardo and Pam Martinez created a successful, powerful organization called Padres Unidos with grassroots immigrant Spanish-speaking parents and students who experienced racism by a school district. Padres Unidos changed education in Colorado. It became a national beacon for those of us who were organizing with oppressed communities and who needed the example of creative, gutsy, and effective organizing that we could emulate and learn from. They were always willing to share and learn. What Ricardo and Pam created has thrived for decades, and the organization is now called Movimiento Poder and is led by a new generation of organizers that Ricardo helped create. His legacy is seen in the many tributes that are flowing throughout social media by justice leaders who came to their place in the movement via his teaching and mentorship.

Ricardo was a key leader in the formation of a number of organizations, and he helped us create the Colorado Immigrant Rights Coalition, supporting efforts to unify grassroots organizations throughout Colorado. We are still guided by his insights today. Ricardo was always present in the early years as we came together and worked to create an organization that lifted up its members.

Ricardo was a treasured leader, someone who could be counted on to be tough, wise and  insightful. He constantly demonstrated the wonderful courage that is the hallmark of visionaries who refuse to compromise on their visions of justice, while being incredibly adept about how to create change within political and educational systems. Anyone who had the pleasure of working with him appreciated his sense of humor and the way he could cut through the noise to steer a clear course with integrity. He will be sorely missed.