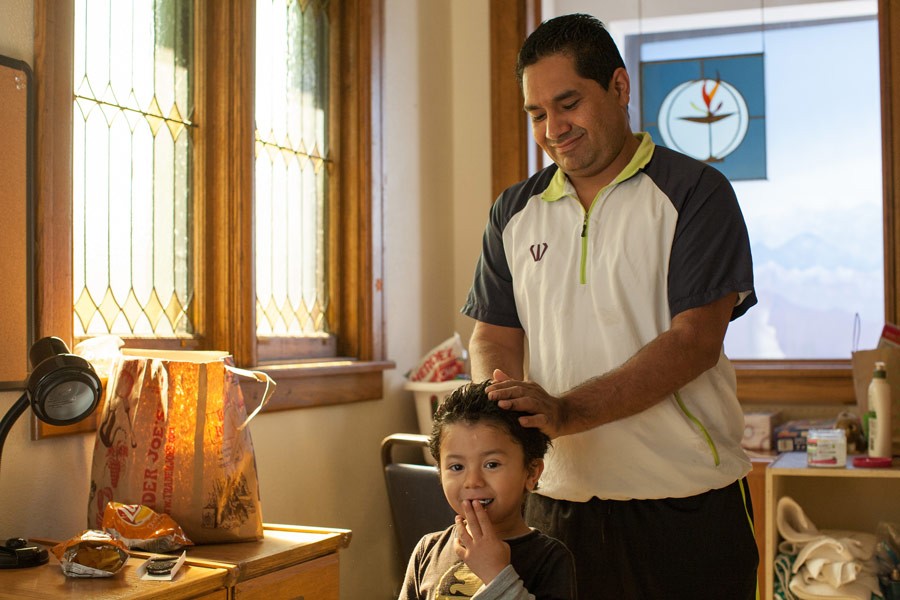 In their temporary bedroom, Elmer (top) and David find a rare moment of calm. – SEAN CAYTON

Sliding across the church’s hardwood floors with a squeal, 3-year-old David is contentedly unaware of the gravity of his new living situation inside All Souls Unitarian Universalist Church in downtown Colorado Springs. He gets all the apple juice he wants and there are always cookies in stock — a toddler’s dream. But for David’s father, Elmer Peña Peña, 37, staying at the church for the foreseeable future is more like holding off a nightmare.

“It feels like all the doors have closed,” he says. “This is the only option I’ve got.”

Peña spoke with the Independent through translation by local activist Jerima King on the morning of Aug. 30. Peña had just spent his first night in sanctuary, defying a deportation order while his attorney works to reopen his case for asylum.

He’s the first to take up All Souls on their recent offer to house immigrants in need — a last-ditch tactic for keeping families together that relies on the policy and precedent that Immigration and Customs Enforcement (ICE) agents don’t conduct raids in “sensitive locations,” including places of worship, schools and hospitals. The sanctuary movement has made a frantic resurgence nationwide since the election of President Donald Trump whose hard stance on immigration puts all 11 million people living in America without authorization at risk for removal.

Trump continually insists that his policies only target the “bad hombres” — immigrants who’ve committed crimes or belong to gangs. But Peña is living proof that those claims are a sham. Not only does he have no criminal record, but the reason he says he’s here in the first place is because he’s a “good hombre” who fled the gang war that’s currently plaguing his country of origin, El Salvador.

Back in the 1980s, the U.S. government backed El Salvador’s military dictatorship against Marxist guerrillas. When Salvadorans fled that bloody civil war en masse, many landed in crime-riddled neighborhoods in Los Angeles that were controlled by black and Mexican gangs. Young refugees formed the gang MS-13. When they were deported in large numbers under the Clinton administration back to El Salvador, where the civil war had left a power vacuum, they brought their gang with them and have since been wrestling with another U.S.-born gang, Barrio 18, for control.

Growing up, Peña says he withstood pressure to join one gang or the other, striving instead for the opportunity to lead a healthy, productive life. That’s what brought him to America.

After an ill-fated entry attempt in 2001, Peña finally made it to Aurora later that year, where his cousin offered him a place to stay while he got a job to start paying his own rent. He did so quickly, first landing a restaurant gig before getting into construction. Peña says that’s where the decent money is, but as a worker without papers, he has been stiffed by general contractors who try to exploit vulnerable laborers.

Despite the challenges, he says he’s always paid his taxes and even been able to save some money. In fact, he really started to thrive: He started a family with the woman he loves and recently bought a house for them all to live in. His older two children are now fluent English-speakers, thanks to their education in Aurora Public Schools — a district famously proud of its ethnic diversity.

But all that was jeopardized by a traffic stop: In 2012, Peña was pulled over for speeding to pick up his eldest son from an after-school program. The resulting traffic ticket got him held for six months at a detention center run by a government contractor in Aurora that holds people on immigration violations. Peña was finally released when he secured a stay of removal, which
is a temporary reprieve available to immigrants who can demonstrate that their deportation would cause “extreme hardship” for their families and communities. The stay was renewed regularly for years — until recently.

Though nothing about his circumstance had changed, his first renewal under this new administration went differently. When he went in for his routine check-in with ICE officials in May, they ordered him to voluntarily leave the country by Aug. 16. Peña was given no opportunity to appeal the decision, he says, just a stack of papers to get signed at the U.S. Consulate in El Salvador.

His attorney, Kimberly Baker Medina, who has a private practice in Fort Collins, tells the Indy this is par for the course in the Trump era. “It’s like there’s just a blanket denial policy,” she says. “[Stays are] supposed to be discretionary, so to say ‘no’ to every case means [ICE] is no longer honoring the intent of that particular remedy.”

It’s tough to advise clients these days, Medina says, so “when Elmer came to my office, crying, so scared to go back, I suggested he could call Colorado Immigrant Rights Coalition … all I can do is try to reopen his case for asylum.” Though the application process can take a long time, she reckons Peña has a strong case to make on the grounds that he has reasonable fear of persecution back in El Salvador. As an asylee, he could apply for lawful permanent residence after a year.

Colorado Immigrant Rights Coalition, an advocacy organization, put Peña in touch with the Metro Denver Sanctuary Coalition, which helped him find refuge in a Denver-area church before transferring to the Springs. (The statewide network’s hotline is 844/864-8341.)

The newly formed Colorado Springs Sanctuary Coalition was caught flat- footed when the request came in, since the living area in the All Souls’ basement had been damaged by flooding earlier this summer. “But when I heard the immigrant members of our coalition say, you know, ‘We’d live in a closet if it meant keeping our families together,’ the decision was actually very easy,” says Rev. Nori Rost of All Souls. “Is it perfect? No. But will [Elmer] stay in this country? Yes.”

For now, Rost has converted her office into a bedroom for the father and son. (David, a citizen, is here since his mother is working full-time in Aurora while caring for his siblings, also citizens, and the family can’t afford daycare.) Church activities will continue as usual. “I’m so appreciative that people I never knew want to help,” says Peña, as David jumps on the bed behind him. Still, it’s frustrating. “So many people have been welcomed to this country; it’s the United States united by immigrants. So, why go after us now when we want the same chance for our families?”

The sanctuary coalition will be collecting donations and fundraising on the Peñas’ behalf. Candace Datz, coalition organizer and youth minister at First Congregational Church, says they’ll need volunteers, clothing, toiletries and non-perishable food, plus money to fix up the basement. Check for more information on the Colorado Springs Sanctuary Coalition Facebook page.

Now that All Souls is occupied, Datz says the greatest need is for new sanctuary churches in the area. “There have been more requests [for sanctuary] since we agreed to take in Elmer,” Datz says. “It’s extremely difficult to say, ‘No, sorry, we don’t have anywhere to put you.’”

That’s why S.H., an immigrant member of the coalition who didn’t want
her name used, feels a renewed sense of urgency. “There are so many more families at risk of being separated … just because the parent may have a traffic violation,” she wrote to the Indy.

“We need more churches to take this commitment and become a sanctuary church [so] those families have a chance to remain unified.”